Riding the cloud wave, and consequently digital transformation, appears to be a sure shot recipe to becoming a CEO in today’s increasingly connected world. This pattern is evident from the elevation of executives like Google’s Sundar Pichai, Microsoft’s Satya Nadella, IBM’s Arvind Krishna and now Amazon’s Andy Jassy from unit heads to chief executives of their respective organisations over the last few years. Nadella, for instance, succeeded Steve Ballmer to become CEO of Microsoft in 2014. Prior to that, he was the executive vice president of Microsoft’s cloud and enterprise group and was responsible for building and running the company’s computing platforms.

Under Nadella’s leadership, the world’s biggest software company deployed its new operating system (OS)–Windows 10–on the cloud on 29 July and labelling it as “Windows as a service”, and also providing free upgrades to users of Windows 7 and 8.1. This was simply unthinkable during Ballmer’s regime.

Pichai’s elevation to CEO came next, and at a time when Microsoft was sharpening focus on its mobile and cloud computing strategies-—the launch of the new Windows 10 being a case in point. Google’s success in taking the Android and Chrome stories forward was what earned Pichai his spurs.

Similarly, Arvind Krishna who became CEO of IBM and a member of its Board of Directors on April 6, 2020, led the IBM Cloud and Cognitive Software business unit since 2017, and was a principal architect of the acquisition of Red Hat–the largest acquisition in IBM’s history. Krishna also served as the director of IBM’s research division since 2015. Previously, he was general manager of IBM’s Systems and Technology Group, IBM’s development and manufacturing organization.

It’s hardly a surprise, then, that Krishan said on January 21 that IBM will invest $1 billion in “rapidly expanding” its partner ecosystem as it sharpens its focus on hybrid cloud and artificial intelligence (AI).

Andy Jassy’s rise to the top position at Amazon is no different. In June 2016, Jeff Bezos appointed Jeff Wilke CEO of Worldwide Consumers and made Jassy CEO of Amazon Web Services (AWS) in “recognition of the roles they have played for a while”. Both were seen as likely successors to Bezos but the strength of the cloud has clearly emerged as the winner.

Cloud infrastructure services spending increased 32% to touch $39.9 billion in the last quarter of 2020, following heightened customer investment with the major cloud service providers and the technology channel, according to a 2 February research note by Canalys. Total expenditure was over $3 billion higher than the last quarter and nearly $10 billion more than Q4 2019 according to Canalys data. For full-year 2020, total cloud infrastructure services spending grew 33% to $142 billion, up from $107 billion in 2019. 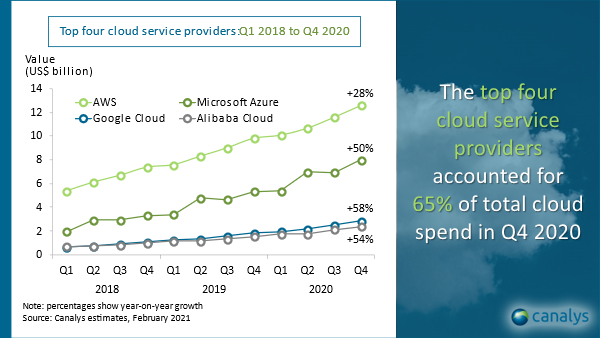 “This is again the largest quarterly expansion in dollar terms, as continuing pandemic restrictions drove intense demand for cloud to support remote working and learning, ecommerce, content streaming, online gaming and collaboration. At the same time, a gradual recovery in economic confidence stimulated cloud investments by organizations in all industry segments to drive digital transformation. Cloud providers are extending their investments in channel partnerships to maintain high demand rates, and support customers, which will be critical for implementing projects in 2021 and beyond,” reads the note.

“Large projects that were postponed earlier in the year are being re-prioritized, led by application modernization, SAP migrations and workplace transformation. Healthcare, financial services and pharmaceuticals are among the industries leading the way, but even those under most pressure are diverting investments to cloud, opening up new revenue streams and diversifying business models.”

Meanwhile, many companies today are adopting a multi-cloud approach to avoid lock-ins with specific vendors. About 22% of enterprises in India are using a multi-cloud environment and the number is expected to reach about 50% in the next two years, according to a January note by Frost and Sullivan. In 2019, the multi-cloud market size that was around $120 million is forecast to grow at more than 40% CAGR between 2020 and 2025.

The research note concludes, “Multi-Cloud adoption is expected to more than double in the next two years. Enterprises having a multi-cloud environment will have a competitive edge over others as the world is moving towards hyper digitization.”

It’s a cliche, then, to say that the CEOs of these tech companies have their work cut out for them. CXOtoday News Desk1 hour agoNovember 29, 2022
A senior citizen based in Bengaluru got a call, ostensibly from the bank asking for details of their account, ostensibly... CXOtoday News Desk18 hours agoNovember 28, 2022
Ever since the government brought in the Data Protection Bill some months ago, there has been an ongoing conversation about...