Owing to the stay-at-home economy brought about by the COVID-19 pandemic in 2020, not only did yearly notebook computer shipment surpass 200 million units for the first time ever, but the 22.5% YoY growth was also the highest on record, according to TrendForce’s latest investigations. However, in comparison with 2Q20, during which production lines resumed operations, and notebook demand saw an uptick, the current global market is plagued by the ever-intensifying pandemic, with various countries instating border control and lockdown measures, making it impossible at the moment to accurately forecast the state of the notebook market in 2H21. Nevertheless, TrendForce currently expects global notebook shipment for 2021 to reach 217 million units, an 8.6% increase YoY. Incidentally, it should be noted that the increasing popularity of distance education has also galvanized a rising demand for Chromebooks, which have contributed substantially to the growth of the overall market. Chromebooks accounted for 14.8% of the global notebook shipment in 2020, while this rate is expected to rise to 18.5% in 2021.

As WFH becomes the new normal for office work, online meeting functionalities will be a major focus of business notebook designs

Since 2020, various companies worldwide have announced the implementation of WFH measures, with certain companies adopting WFH until September this year. In order to meet the audiovisual demands of online meetings, as well as the personal and entertainment needs of end users, notebook brands have been making improvements to their business notebooks’ functionalities, including AI, camera modules, sound quality, background noise removal, and image qualities. In particular, HP, Dell, and Lenovo are each releasing new mid-range and high-end mixed-use business notebooks in response to the commercial opportunities generated by the aforementioned user demands. Demand for this product category is expected to peak in 1H21 and in turn massively raise overall notebook shipment for the period as well.

In addition to mixed-use business notebooks, the new normal in the post-pandemic era has compelled brands to quickly establish dominance in the Chromebook market as well. Although Chromebook shipment reached 29.6 million units in 2020, an impressive 74% YoY growth for year, current demand from most educational markets has yet to be met. This, along with continued Chromebook adoption in Central America, South America, and the Asia-Pacific regions, resulted in peak Chromebook demand. At the moment, TrendForce projects yearly Chromebook shipment to exceed 40 million units in 2021, a 37% YoY growth. Moreover, given Google’s aggressive product strategies, this projection may have even further room for growth.

With regards to operating systems, Windows remains the dominant choice in the notebook market. However, due to the rapid growth of Chromebooks in 2020, Windows’ market share dropped below 80% for the first time ever. Windows is unlikely to recover its lost market shares in the short run, since its decline is expected to persist going forward. TrendForce expects the market shares of Windows, Chrome OS, and MacOS to each stabilize at about 70-75%, 15-20%, and below 10%, respectively.

With regards to notebook CPUs, AMD’s Zen+ microarchitecture-based CPUs saw a major uptick in notebook adoption in 2019, with about an 11.4% market share. This figure rose to 20.1% in 2020 after a period of product ramp-up. In particular, the Ryzen 3000 series CPUs have been receiving excellent market feedback in the entry-level and mid-range notebook segments, thereby convincing notebook brands to start equipping their Chromebooks with AMD CPUs, bringing about a further and considerable growth in AMD’s market share.

The Apple Silicon M1 processors, based on the ARM architecture and officially released in November 2020, reached a mere 0.8% market share for the year. Apple adopted the ARM architecture primarily to optimize MacBook performances. Along with the release of Apple Silicon M1, Apple has also completed the integration between its hardware, software, and SaaS platforms. The company is expected to release 14-inch and 16-inch MacBook Pros, both of which will be equipped with Apple’s in-house CPUs, after 2Q21, raising Apple’s notebook market share to about 7%. The 7% and 20% market shares from Apple and AMD, respectively, mean that Intel will be faced with increasing competitive pressure in the market and need to deliver an appropriate product strategy in response. 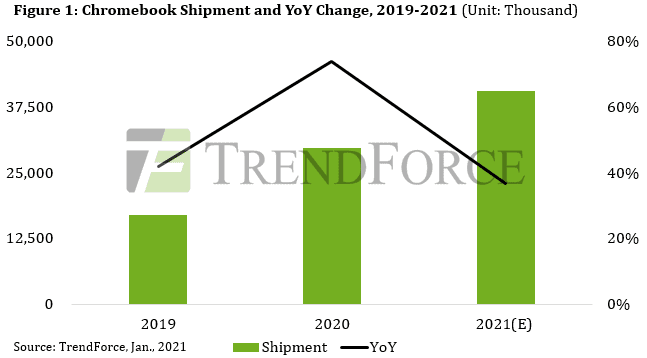 For more information on reports and market data from TrendForce’s Department of Display Research, please click here, or email Ms. Vivie Liu from the Sales Department at vivieliu@trendforce.com 5 days agoApril 15, 2021
Complete the form below and a sales representative will follow up.