In the recent past a gap has been identified between the availability of skilled engineers and job opportunities for them in the Indian market. This was observed to be worsened due to hiring freezes across all domains with many tech companies evening firing upto 10% of their employees. Many of the big tech companies hire or poach talent from each other for roles that are not widely advertised. Being prepared and highly skilled when the opportunity is presented is of utmost importance.

As observed in McKinsey’s Survey, the sentiment from Fortune500 companies is that 82% believe that their teams lack highly talented people. This sentiment combined with the current market forecast of a downturn in the upcoming months, is the reason for  many companies freezing hiring and also firing non performing talent. They hire slow and fire fast In another survey by NASSCOM called -Tech CEO Survey 2022 it was observed that the highest priority for companies at the moment is employee engagement (retaining critical talent). Thisis a huge change from their  previous top priority of releasing new products and developing revenue sources. This trend leads us to understand that companies are willing to spend more to retain their top talent.

The big question here is how to remain inside this pool of talent that gets retained? Apart from Nepotism and reservation nobody is safe from the possibility of getting fired, this can be seen in examples from Netflix to even Cars24 and others who have fired employees to the tune of 600 employees or even 10% of the workforce. A tried and tested method of being retained is to upskill with 53% of companies being willing to invest in building skills as opposed to hiring fast and firing slow which seems to be the trend amongst many companies in the tech industry.  This is corroborated by the boom in EduTech Startup like Scaler Academy, Unacademy and many others that are focusing on teaching the ever growing pool of engineers as estimated by NASSCOM survey in 2019, when India  as a country whole produces 15 lakh engineering graduates every year, but only 2.5 lakh of them succeed in getting jobs in the core engineering industry. That’s less than a 20% conversion from study to workforce which poses a problem since each year this number is only going up. In another survey by Aspiring Minds, 80 percent of Indian engineers were unemployed in 2019.

A great way to stand out in the sea of available engineers is to have the skills of being an engineer familiar with System Design as most top companies have some variation of a System design round or product design round with more weightage given to it the more experienced the candidate.

The common experience faced by many software engineers, when applying to most companies, is to be asked a mid to high level problems from places like LeetCode or HackkerRank when their day-to-day work requires none of the skill required for these problems, hence, the ones that make it through are people who were good at Rote learning those specific problems ace the interview but are not on par with their real-world equivalents.

Having gone through similar experiences Gaurav Sen started to solve these problems through his YouTube channel, which has amassed 4.5Lakh subscribers, and when he found that the content around system design was lacking. He has made it his mission to help prepare engineers to answer even the most unexpected questions by grinding in the basics in each and every possible situation by breaking down the different approaches to be taken for different systems while discussing the logic being used behind the decisions taken. 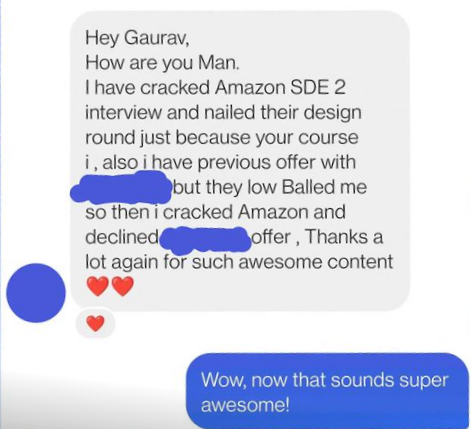 The course at InterviewReady today boasts of being one of the top resources by engineers for interview preparation with a daily active user count of approx 1000. Viewed as having more indepth and wider range of systems than Educative and Algoexpert the course is now 13 chapters long having started off at 4 with no increase in price. Included in the course is a Live class twice a month where learners can directly interact and solve their doubts. InterviewReady is also working on other platforms to help the preparation like a FREE mock interview portal and other exciting features.

India’s technical education infrastructure includes 2500 engineering colleges, 1400 polytechnics and 200 schools of planning and architecture and getting an edge isn’t always easy, since the focus has shifted to self improvement and upskilling. Even improving your chances as a software engineer by 0.01% will make a big difference and help you stand out in these troubling times.

Founded in 2019, by Gaurav Sen, is an interview preparation platform designed for software developers to upskill. As of Aug 2022, it is currently enrolled with over 9000 students with a daily active user rate of 1000 users.

The company has directly helped place 50+ students in top product companies and contributed to as 200+ placements across the industry, including Meta, Amazon, Netflix, Microsoft, Directi, Uber and many more. The platform consists of a course to upskill, a Mock Interview platform and will include an automated System Design interview in the coming future. The course consists of 13 chapters that use real world examples to explain the tradeoffs and features along with the decisions that may have been used to create them. The chapters vary from Fundamentals, High-Level Design and Low-Level Design. Additional free resources have been added to give back to the community and make the course accessible to engineers irrespective. In addition to the course the Mock Interview platform allows participants to freely schedule Interviews in the time slot and type that works for them.

InterviewReady is part of the MAHA-Cornell program that is setup by the Government of India and Cornell University, being one of the 60 companies selected to join the accelerator program. Narasimha Raju14 hours ago
~ Tier II markets emerging as the hotbed for digital payments in India; 73% loving the ease of use ~...