Ookla®, the global leader in network intelligence and connectivity insights, today released a report based on the data from Speedtest Intelligence® to show early 5G performance across select cities as well as an indication of the growth of the number of 5G-capable devices.

On October 1, Prime Minister Narendra Modi launched 5G services in select Indian cities during India Mobile Congress 2022 in New Delhi. Operators took the opportunity to discuss their 5G plans at the event with Bharti Airtel launching their 5G services in eight cities and Jio’s 5G beta trial “Jio True 5G for All” launching it on October 5 in four Indian cities, including Delhi, Mumbai, Kolkata, and Varanasi.

5G download speeds reach 500 Mbps on 5G test networks- According to the Speedtest Intelligence report, telecom operators have been testing their networks before the October 1 launch which saw a wide range of 5G download speeds: from low double-digit (16.27 Mbps) to 809.94 Mbps. This data points to the fact that the operators are still recalibrating their networks. The speeds are expected to be more stable moving forward as these networks will enter the commercial stage. 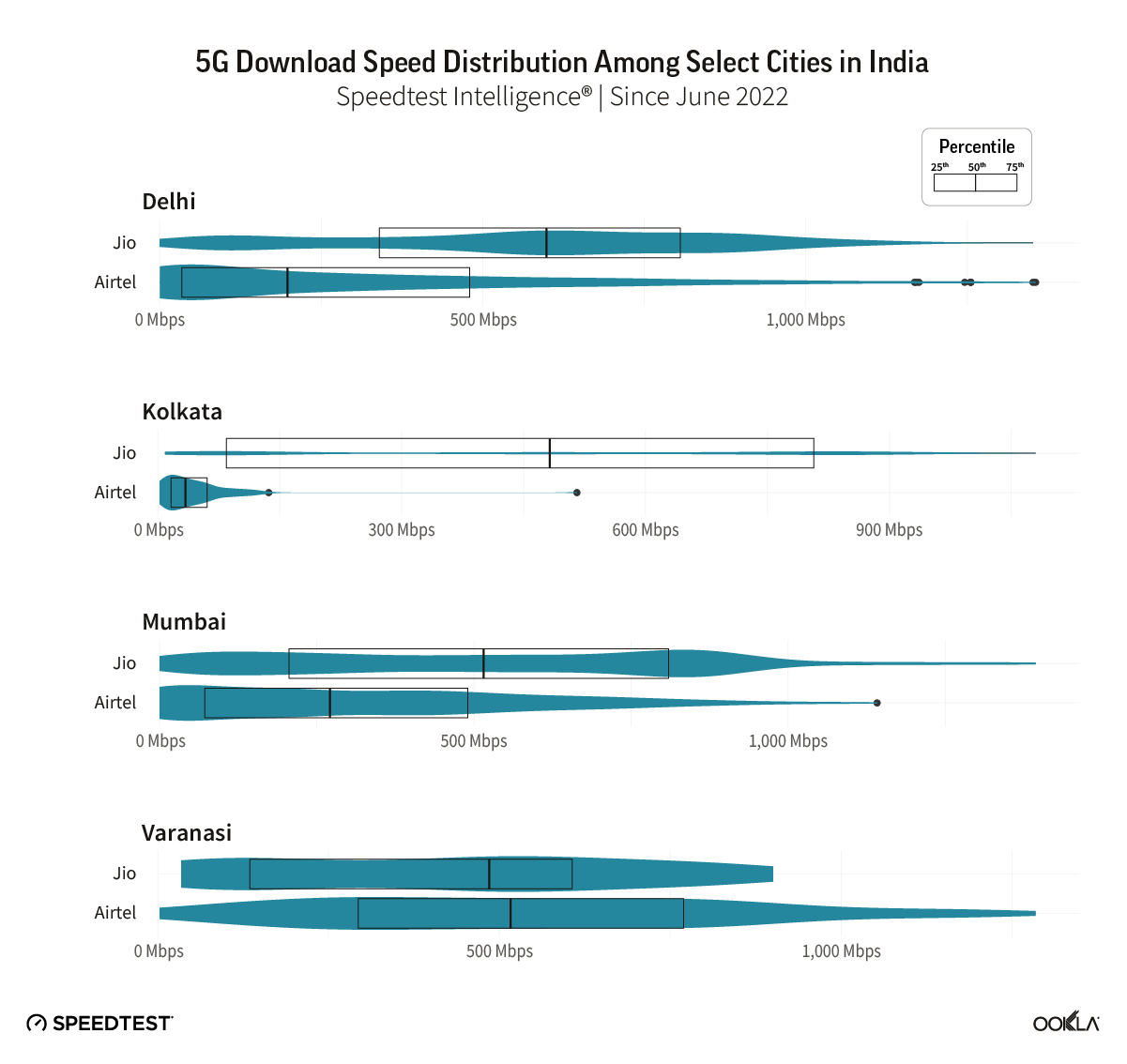 Much faster mobile internet in the future than what 4G LTE is achieving- According to the Speedtest Global Index, India ranked 117th in the world for mobile download speed at 13.52 Mbps in August 2022. These new 5G results show that 5G speeds are far superior than India’s existing network. While we need to approach these early results with caution, 5G devices are already showing they can achieve much faster speeds, at least under artificial controlled testing circumstances e.g., no network congestion and ideal network coverage. 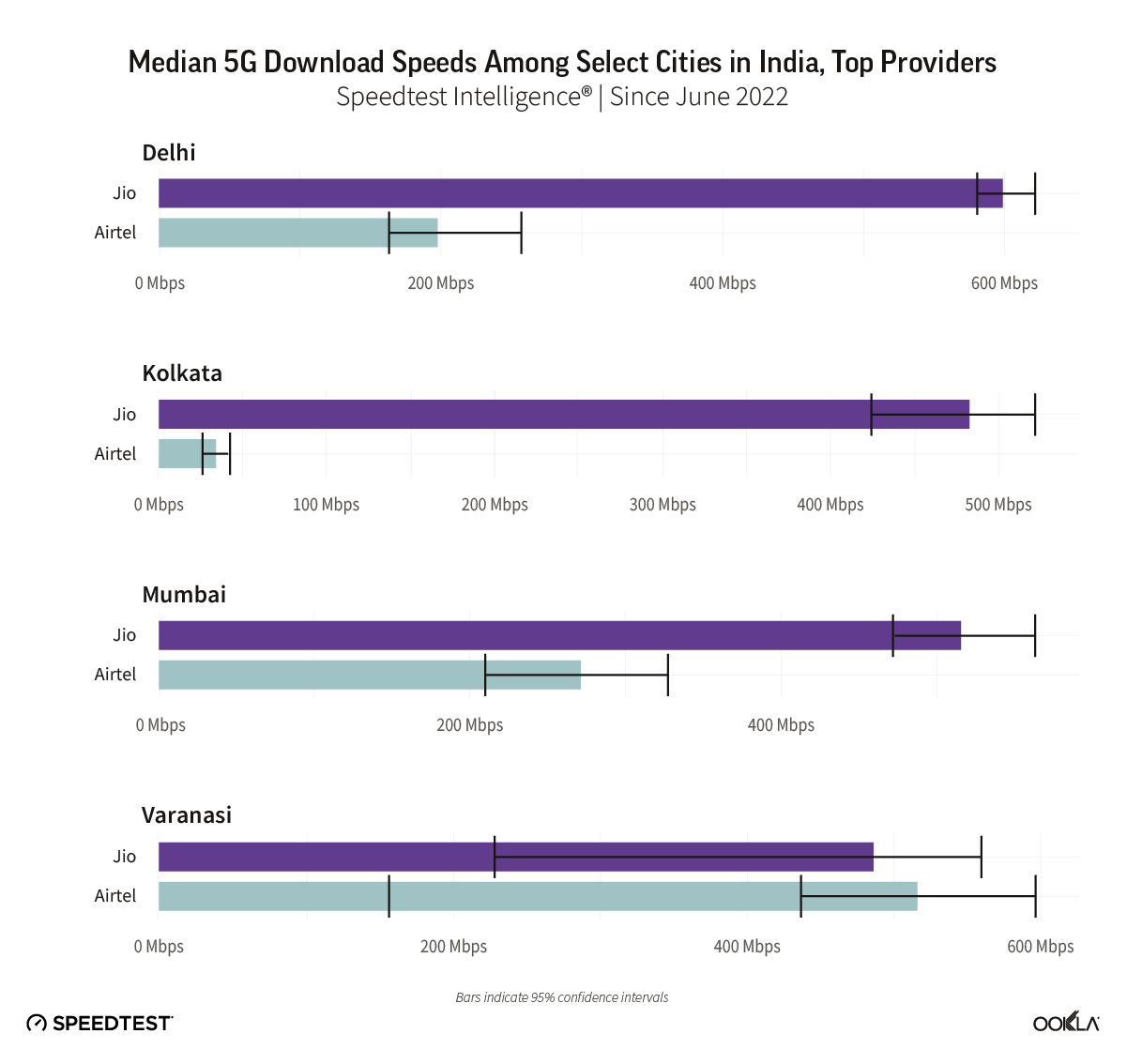 Consumers are 5G ready- As per Ookla’s recent consumer survey, 89% of Indian smartphone users are ready to upgrade to 5G. Operators have an existing addressable base of devices that they can target from the start, and over the past year the number of 5G-capable devices has been on the rise. Among Speedtest users, Jio saw the largest increase in 5G-capable devices (67.4%), followed by Airtel (61.6%), and Vi India (56%). 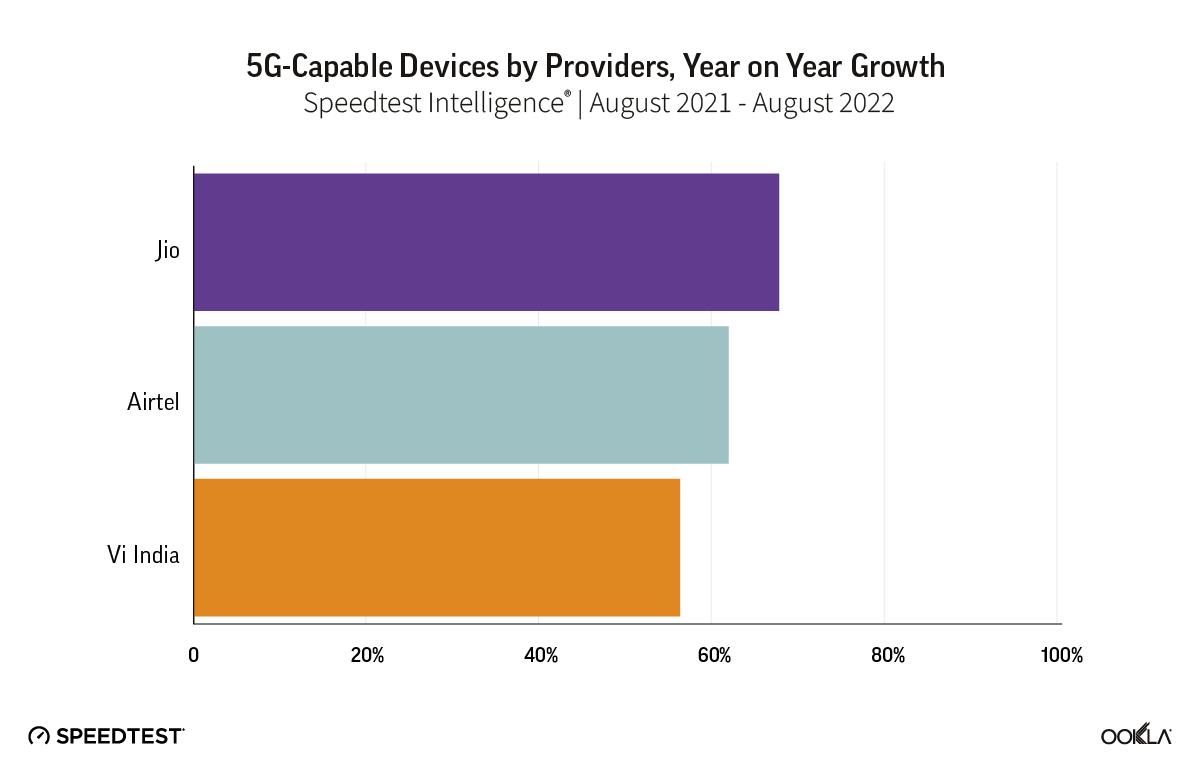 As per the findings of the report, Hyderabad is the one city where all operators have seen significant growth in terms of 5G-capable devices, with Jio even tripling its install base. 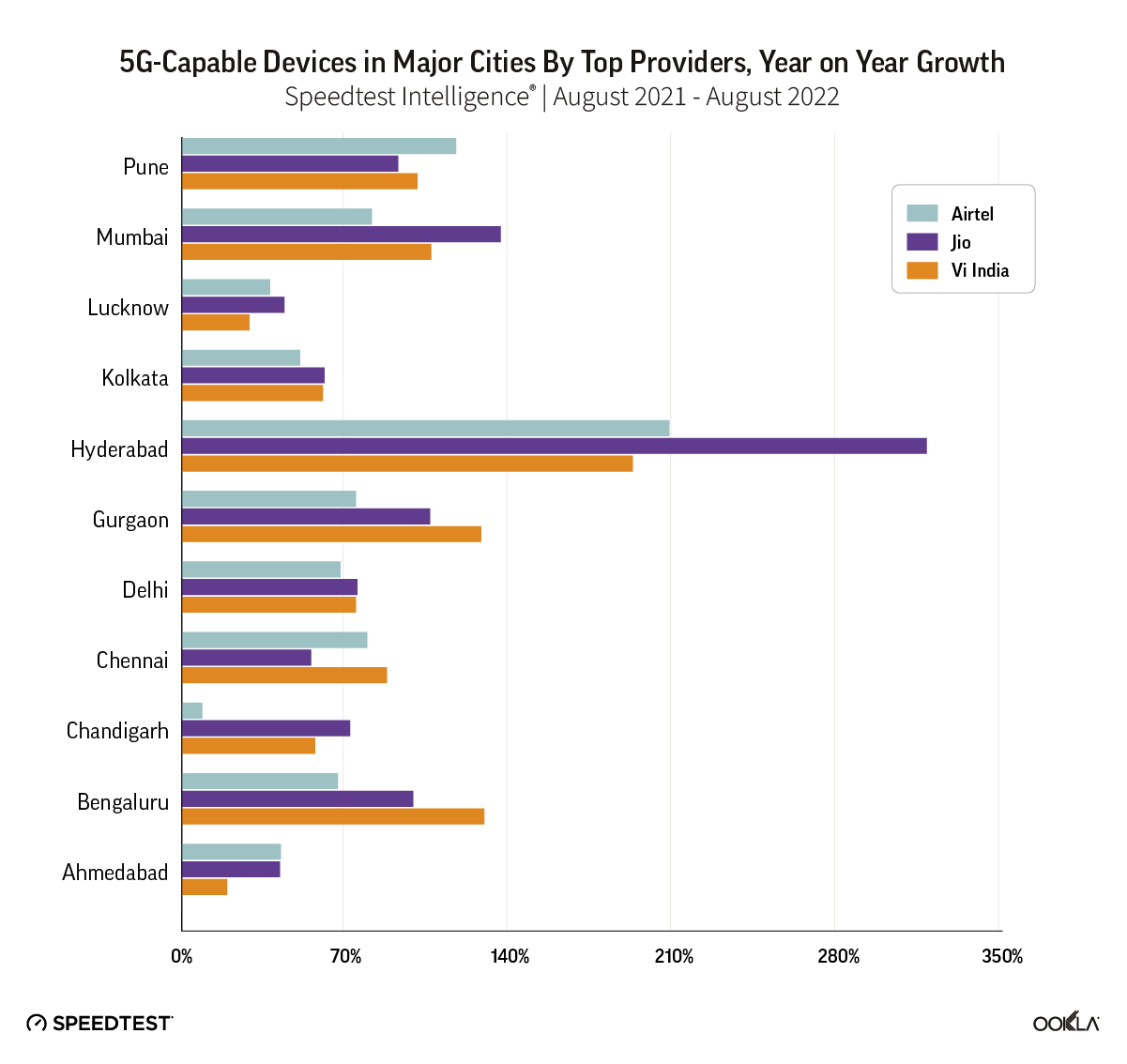 iPhone users have most 5G-capable phones- The report shows that 51% of survey respondents already had smartphones supporting 5G. The top smartphone vendors in the market are Samsung (31%), followed by Xiaomi (23%), Realme, and Vivo. While only one in ten survey respondents had an iPhone, Apple smartphones tend to be more 5G capable. In fact, according to Speedtest Intelligence data, the iPhone 12 5G is the most popular 5G-capable device in the Indian market.

Ookla® is a global leader in network intelligence and connectivity insights. For almost two decades, Ookla has set the industry standard for both fixed and mobile network testing and analysis. From its world-renowned Speedtest® and Downdetector® platforms to an accompanying and growing suite of end-to-end enterprise solutions, Ookla’s mission is to make the internet better, faster, and more accessible for everyone. Narasimha Raju5 hours ago
Exploring the metaverse, new biometric possibilities, working from anywhere and traveling light are set to transform the industry next year... Narasimha Raju9 hours ago
First-ever ABB FIA Formula E World Championship race in India will be sponsored by Greenko, one of the world’s leading... Narasimha Raju11 hours ago
Announces the formation of a Working Group to bring together key stakeholders and Associations in the private space technology sector...