Medulance, India’s first technology-enabled emergency response service provider, has today announced the successful rollout of what3words. The partnership enables faster incident response times for patients in medical emergencies all over India. With the free what3words app, patients can identify and share exactly where assistance is needed, even in areas with no or weak data connection. 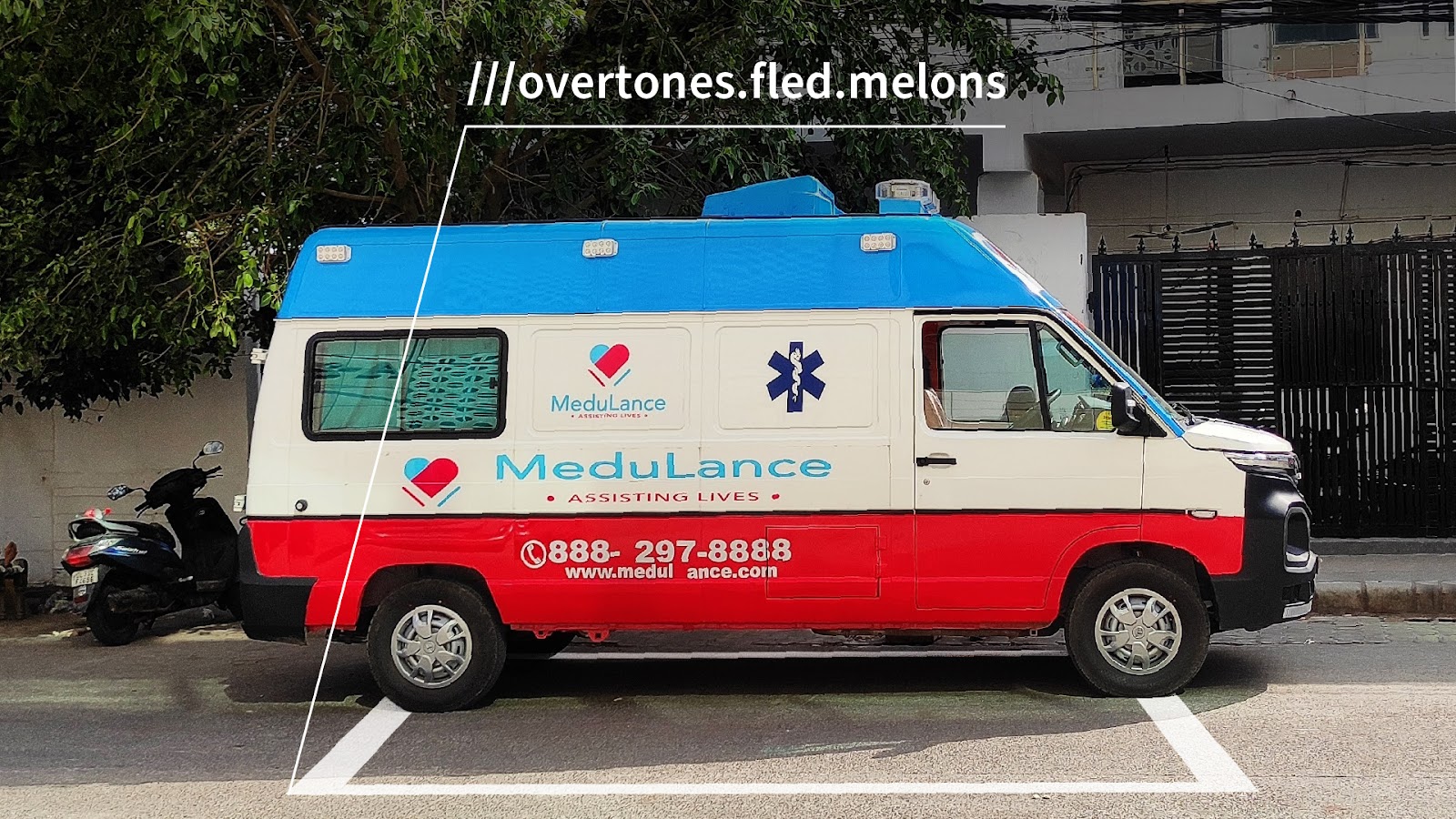 Medulance has an aggregated fleet of 7,500 ambulances across 60 cities, and is one of the emergency services providers who are also a part of the Government’s 102 Ambulance fleet in Delhi. The company also offers a service to its own customers and via a dedicated helpline number. Medulance aims to revolutionise the medical transportation space with fast and efficient dispatch and response times.
When it comes to time critical emergencies, being able to find and communicate precise locations is key. This can be challenging in a country like India that’s both densely populated and home to vast unaddressed areas. In medical emergencies, there often isn’t enough time to have long conversations over the phone or via text to figure out a caller’s exact location. However, what3words has made it possible to identify and easily communicate any location, precise to a 3m x 3m square. With the technology, Medulance has reduced its emergency response time from 35 minutes to 11 minutes on average, and in some cases dispatch teams in Delhi have arrived at an incident in under ten minutes.

what3words has divided the globe into a grid of 3m  x 3m squares and given each square a unique combination of three random words: a what3words address. For example, ///setting.adjusted.derailed will take you to the entrance of the AIIMS Jai Prakash Narayan Apex Trauma Centre in New Delhi. The what3words app is free to download for both iOS and Android devices, and works offline, making it ideal for use in areas with unreliable data connection. what3words can also be used via the online map at what3words.com.

The technology is available in over 50 languages, including 12 South Asian languages: Hindi, Marathi, Tamil, Telugu, Bengali, Kannada, Nepali, Urdu, Gujarati, Malayalam, Odia, and Punjabi. If a caller doesn’t have the what3words app, call handlers can share an SMS with a link to what3words.com which allows the caller to retrieve the what3words address for their exact location and recite it over the phone. The technology will save dispatchers and responders precious time and resources in an emergency, and in some cases, save lives.

The what3words technology is already being used by over 120 emergency services control centres around the world in the UK, US, Australia, Germany, France, Belgium, Austria, Singapore, Canada, India, and South Africa to locate people in need. Medulance is already seeing the benefits of using what3words, and how it can shave precious minutes off emergency response times. For example, in Delhi, a caller needed to book an ambulance for his grandparents who are residents of Kamatchi Amman Kovil St, Puducherry. Using what3words, the elderly patients were able to communicate their precise location to the Medulance drivers, who were able to locate them with ease. The patients were treated and have made a full recovery.

Medulance has also found what3words to be useful in parts of Southern and North East India. In remote locations, callers can struggle to describe their exact location without any identifiable landmarks or street addresses to guide them. With what3words, Medulance are operating more efficiently in rural areas, and provide assistance to victims in distress.

Pranav Bajaj, Co- Founder of Medulance comments: “In an industry where response time matters the most, what3words has helped us reduce our response time with their efficient, easy to communicate, and location-based services. Medulance has been able to provide a response time of less than 10 minutes with a seamless service. Besides other data-driven practices, what3words has played a major role in helping Medulance save and assist more lives. Even when a person calls us directly on our helpline, what3words allows us to track the patient accurately even without a smart application.”
Chris Sheldrick, Co-founder and CEO of what3words adds: “Receiving timely aid in an emergency is incredibly important, but this can be difficult for dispatch teams when a caller can’t describe exactly where they are. With what3words, anyone can identify their location with just three simple words. This can be lifesaving in an emergency.”
ENDS

what3words began operations in India in 2019, and is now accepted across a number of platforms including TVS Motor, Triumph Motorcycles, Tata Motors and Mercedes-Benz. Companies such as Imagine Online, Nirmalaya, TWF Flours, Evocus H2O & Dorje Teas have also adopted the technology so their users can input what3words addresses into their checkouts for hassle-free deliveries. DriveU, one of the largest driver aggregator platforms in India, uses what3words so drivers and riders can save precise drop-off and pick-up locations. Lots of Airbnb and Homestays of India hosts use what3words to help visitors find their home, and guests at Royal Orchid & Regenta Hotels, Amã Stays & Trails by IHCL & The Fern Hotels & Resorts can find the what3words address of the exact property entrance on their booking confirmation. BVG Mems Dial 108 and Medulance use what3words to shorten incident response times in an emergency.

About Medulance
Medulance Healthcare is India’s first and leading comprehensive end-to-end emergency response service provider that offers customized on-demand and dedicated emergency response services. Launched in 2017, by Mr. Pranav Bajaj and Mr. Ravjot Singh with the aim to make the accessibility and affordability of an ambulance as easy as taxis, with an aggregated fleet of 7,500+ ambulances spread across 60+ cities in India, Medulance has helped save and assist more than 500,000+ lives and more than 100,000 covid lives to date.
With the fastest emergency response system, the company provides a wide range of services, including ambulatory services, medical rooms, a dedicated helpline for organizations,
emergency management technology, as well as first aid and safety training for various private and government organizations.
About what3words
Co-founded in London in 2013 by Chris Sheldrick, what3words is the simplest way to talk about location. The system covers the entire world, never needs updating, and works offline. A what3words address is a human-friendly way to share very precise locations with other people, or to input them into platforms and machines such as ride-hailing apps or e-commerce checkouts. It is optimised for voice input and contains built-in error prevention to immediately identify and correct input mistakes.

The free what3words app, available for iOS and Android, and the online map enable people to find, share and navigate to what3words addresses in 50 languages to date. Millions of what3words addresses are in use around the world, with thousands of businesses using them to save money, be more efficient and provide a better customer experience. what3words is integrated into apps, platforms and websites, with just a few lines of code. Products are available for free or for a nominal fee for qualifying NGOs. Its partners include Mercedes-Benz, Triumph Motorcycles, Premier Inn, the AA and many emergency services across the world.

what3words has a team of over 100 people, across offices in the UK, USA, Germany, India and Mongolia. The company has raised over £100 million in capital from investors such as Intel, Aramex, Deutsche Bahn, Subaru and Sony Innovation Fund.